Insufferable
social media influencers and the motivational speakers they rip off both agree
that the practice of goal setting can help you “achieve your dreams.” While the
Anaheim Ducks and their fans have had more to dream about and less to celebrate
this season, there are some goals that the Ducks should set that will show
incremental improvement. Meeting those goals will provide hope that this will
be the last season of “retooling.”

The Ducks are 12 points out of the last wild card spot in the Western Conference and 12 points out of third place in the Pacific Division. They are as likely to achieve the goal of making the playoffs as you might be to achieving fame and fortune in 2020. Not everyone picks up a winning lottery ticket off the street worth $100,000,000, or one Jordan Binnington.

Still, the Ducks can set the realistic goal of reaching NHL .500, which means finishing with equal numbers of wins and losses with overtime losses sprinkled in. It’s not that lofty of a goal. Theoretically, a team could go 1-1-80 and technically be considered NHL .500, but let’s be realistic.

However, at this point last season, the Ducks were in a nosedive where they lost 25 of 30 games between mid-December and early March, including 12 in a row. That resulted in Randy Carlyle’s firing. 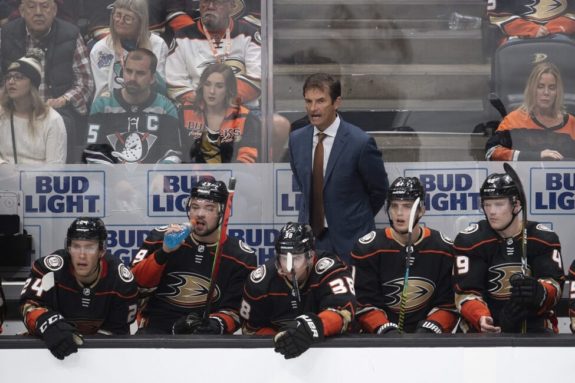 If the Ducks want last season to be rock bottom, finishing this season at NHL .500 would be a good start. (AP Photo/Kyusung Gong)

While
the Ducks might be worse at this point in the season compared to last year
record-wise, it still doesn’t feel like they are quite as hopeless.

How realistic is it that the Ducks achieve the goal? The answer is reasonably, if they play slightly better.

Anaheim
had earned a regulation win in roughly 40% of the 43 games they had played by
Jan. 8. At that pace, they would finish with about 32 wins after 82 games. The
same math leaves you with 40 losses in 82 games. That would mean a final record
of 32-40-10, three regulation losses worse than last season, not good.

But,
expecting the Ducks to improve in the second half of the season isn’t
ridiculous. They have young players who are still learning the NHL ropes, and
hopefully, injuries aren’t as plentiful as they have been so far. It’s hard to
believe they’d lose their top pairing on defense again.

Speaking
of the top pairing, Josh Manson’s game doesn’t have many more places to go but
up. Troy Terry has been cleared to play, and Derek Grant will return soon.

Even if
the Ducks lose more overtime games, the 3-on-3 format is as unpredictable as it
is exciting, so those one-goal losses aren’t a horrible sign for Anaheim’s
development. Reaching NHL .500 is a reasonable sign that the Ducks
might be on their way back up, albeit slowly.

If they
are to achieve that goal, there are a couple more they would have to meet
first.

Last season was one of the Ducks’ worst in franchise history from an offensive perspective, and for the most part, things are improving this season. Anaheim is on pace to score 215 goals this season. That’s 16 better than last season’s mark of 199. That is a 2.63 goals per game output so far this season compared to 2.43 last season. 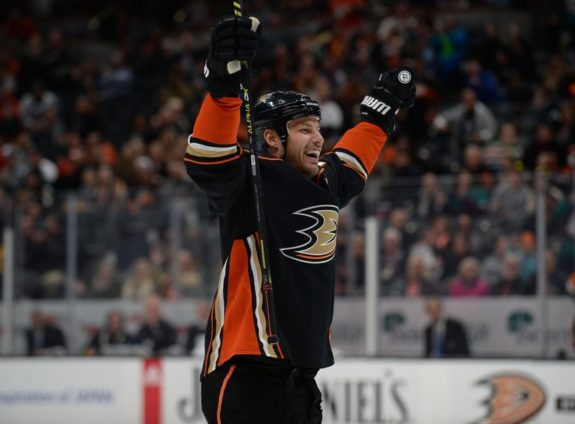 Even with their scoring issues, the Ducks are on pace to finish with more goals than they did last season. (Gary A. Vasquez/USA TODAY Sports)

That makes you realize just how pathetic the Ducks’ offense was last season considering how hard it still is for the team to score this season.

However, goal-scoring league-wide is up again – goals have risen from 3.01 per game in 2018-19 to 3.07 so far this NHL season, so although the Ducks are well below the league average, they increased goal-scoring from last year to this year more than the league mark, which is a positive sign.

The Ducks have trended down in goal-scoring since their successful first month, which feels like a different decade…get it? Their goals per game stood at 2.79 at the end of October, and without that month, their output for the season average 2.41.

Lately though, Ducks goal-scoring is trending up again thanks to a power play that has dragged itself from No. 30 in the league mid-way through December up to No. 26. It’s not mind-blowing by any means, but watching the Ducks go on the power play once again feels like a real opportunity rather than an embarrassment.

In fact, from Dec. 10 until today, the Ducks have the league’s No. 9 power-play, converting at a rate of 23.8%. That’s the second-highest rate in the Pacific Division behind the Vegas Golden Knights.

That’s a sample size of 13 games, indicating that the improvement isn’t just a stroke of luck. If the Ducks can continue to have better success on the power play and get slightly better numbers from players like Ondrej Kase (if he isn’t traded) and more contributions from their youngsters as they develop, the goal of significantly outscoring the 2018-19 Ducks should come to fruition.

This and the previous goal should be obvious, but considering who the Ducks' coach is, surrendering fewer goals than last season has a more profound significance. 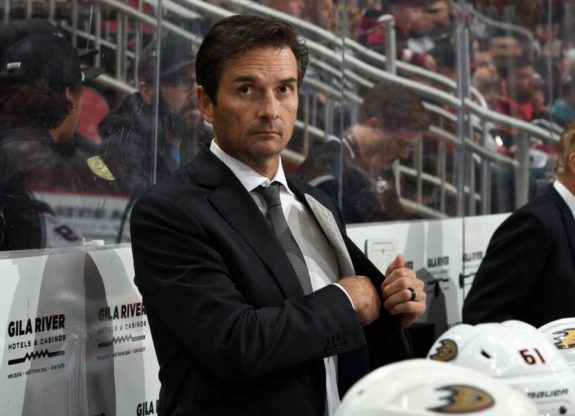 The Ducks continue to struggle defensively, and it's up to Dallas Eakins to help change that. (Photo by Norm Hall/NHLI via Getty Images)

The 248
goals the Ducks surrendered last season were the third-most in franchise
history and the most since the early seasons of the franchise’s existence.
There were some extenuating circumstances.

The team played under two coaches, between Randy Carlyle and Bob Murray, goaltender John Gibson missed time with an injury. To make matters worse, coaches consistently played Ryan Kesler who was a shell of his Selke Trophy-winning self until his season finally ended in March due to his nagging hip injury.

Last season was brutal for multiple reasons, so it’s not a surprise that the Ducks gave up so many goals. That shouldn’t be the case this season, but it might happen. The Ducks are on pace to give up a staggering 259 goals. That would be the second-worst mark in franchise history behind the 1997-98 Mighty Ducks, who won 26 games.

I know goal-scoring is up this season, and I know the Ducks are ranked in the middle of the NHL in goals against, but it’s still a big deal. When you have Gibson in goal and Ryan Miller backing him up, and you’re still giving up that many goals, there is a major problem.

Maybe it’s a result of Murray’s struggles to acquire another difference-making defenseman, maybe Gibson is having a bad year, and Miller is aging. Or maybe it’s the coach.

Can Dallas Eakins Improve His Reputation for Coaching Team Defense?

Dallas Eakins is slowly turning this big, slow, ocean liner of a team toward having a modern-day NHL offense and he’s employing a much more exciting style than his predecessors. But, people questioned his defensive acumen during his stint as the Edmonton Oilers head coach and last season’s San Diego Gulls team exhibited the same inability to keep pucks out of their net as the Ducks are currently. (from ‘”My bad.” Edmonton Oilers coach Dallas Eakins admits a mistake with “swarm,” tries to correct it.,' Edmonton Journal, 10/31/2013) 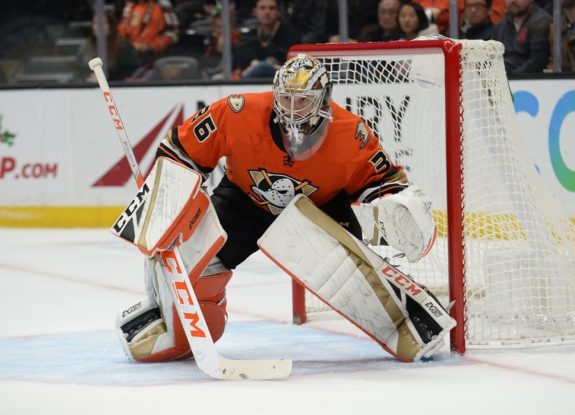 Even with John Gibson and Ryan Miller in net and healthy the Ducks continue to give up goals at a breakneck pace. (Gary A. Vasquez/USA TODAY Sports)

Are these defensive issues a deeper problem that comes along with Eakins behind the bench? The Ducks better hope not.

With Manson and Hampus Lindholm back from injury and hopefully able to avoid them the rest of this season and Erik Gudbranson playing well, the Ducks should improve on defense, especially in front of their own goal. That has been an issue of late.

If the Ducks can squeak under last season’s goals-against total, or at least get close to it, then it might show Eakins’ teams can improve on defense. If not, look out.

Though this season isn’t about making the playoffs, the Ducks should try to meet and exceed these goals to show that they are genuinely improving. Finishing at NHL .500, scoring more goals than last season, and minimizing goals against compared to last season would all show the team is getting better.

For more on the Ducks defensive woes, tune in to the newest episode of the Flying V Anaheim Ducks Podcast!

The post Anaheim Ducks' Goals for 2020 appeared first on The Hockey Writers.