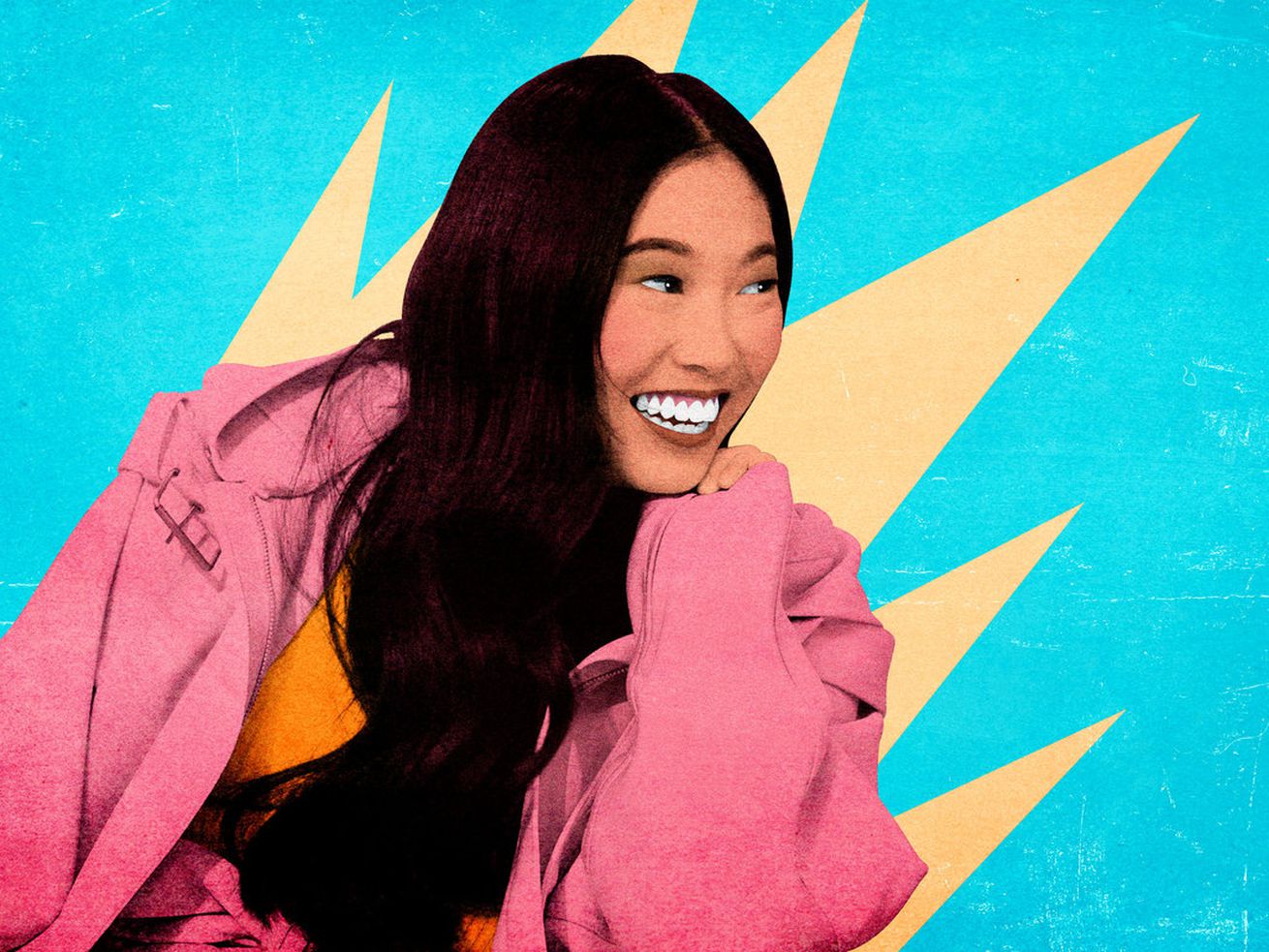 The Golden Globe–winning actress/comedian/rapper’s new show is no ‘Farewell,’ but there are some joys to watching it

Midway through the pilot episode of the new Comedy Central stoner-goofball sitcom Awkwafina Is Nora From Queens, our hero and titular star, who probably should’ve gotten a Best Actress Oscar nomination last week, finds herself dancing awkwardly in a humiliating red dragon outfit on 420camchicks.com. It’s that kind of show. It’s fine. She is dancing with her friend Chenise (Makeda Declet), who is dressed like a drum majorette and offers encouragement: “I don’t know how, but I think they’re liking it,” she exclaims, checking her laptop. “Guy from Tasmania just donated a bitcoin.” Ennobled, Nora gets too excited (“I’m gonna get that Bezos money! I’m gonna back up the truck!”), bumps into a candle whilst backing up the truck, and unknowingly lights her dragon tail on fire.

Fiery hilarity ensues. Well, six seconds’ worth of fiery hilarity, anyway—Comedy Central ain’t got much of a stunt budget. Still, let that be a lesson to you about the dangers of abusing rap-adjacent slang, although an unusual dexterity with rap-adjacent slang is a big part of the reason Awkwafina got this gig in the first place.

Awkwafina Is Nora From Queens, which debuts Wednesday night and is already renewed for Season 2, does indeed tell the whimsical, semiautobiographical tale of the young woman of Chinese and Korean American descent born Nora Lum (in Queens) who first skyrocketed to viral fame as Awkwafina via the 2012 rap parody “My Vag.” Yes, “My vag won Best Vag,” rapped the brash multihyphenate hypebeast who would, eight years later, win the 2020 Golden Globe for Best Actress in a Motion Picture, Musical or Comedy. “Your vag won Best Supporting Vag.”

Her voice had not yet acquired the signature booming CBD-and-sandpaper rasp that makes her sound like, as she put it, “a 58-year-old divorce attorney.” (“Even men, when they impersonate my voice, they go lower.”) Nor was Awkwafina yet fully leaning into the outlandish street-rapper caricature often described in both heated Twitter threads and diplomatic think pieces as a “blaccent,” still a thorny issue in 2018, when she broke out via near-simultaneous scene-stealing roles in Ocean’s Eight and Crazy Rich Asians. (“You gon’ roll up to that wedding, you gon’ be like, bak bak, bitch.”)

The cumulative result is quietly one of the stranger budding-superstar arcs of our time, and a Comedy Central vehicle is not exactly the highest point of that arc: Awkwafina Is Nora From Queens has been in the works since 2017 at least, and represents a dramatic step down from The Farewell, the tender and visceral 2019 Lulu Wang film that truly earned Awkwafina that Golden Globe. (“This is great,” her splendidly deadpan acceptance speech began. “If I ever fall on hard times, I can sell this.”) Thus does the show simultaneously depict a fictional 27-year-old deadbeat striving and a real-life 31-year-old Hollywood phenom slumming.

Awkwafina Is Nora From Queens is fine. Dumb, but fine. Pretty dumb, though. It is plainly striving for Broad City–style lovable-loser vibrance and plainly doesn’t get there, in part because it can’t hope to manufacture anything approaching Abbi-and-Ilana chemistry. (It’s definitely no The Other Two, either.)

Which is not to say that Awkwafina doesn’t surround herself with talent. BD Wong, for example, plays her mesmerizingly chill father and steals the pilot with a dazed recollection of her birth: “You know that your mother was in labor for like 37 hours? You clung onto her uterus like the Thing. It was so gross, man. I threw up on the nurse.” Saturday Night Live rookie Bowen Yang, whose contemptuous eyebrows should immediately get their own separate Comedy Central vehicles, has a too-fleeting role as a stuffy Silicon Valley doofus; Lori Tan Chinn, as Nora’s profane grandmother, does the best she can with the tiresome profane-grandmother gig. (“I told the hairdresser I wanted to look like Eminem” is much funnier, for the record, than “This was a picture of my vagina after my hysterectomy.”)

Awkwafina herself, meanwhile, radiates a rapturous and seemingly brainless off-kilter charm that burns brighter the subtler it is. She’s a living-at-home burnout who can’t get (and/or keep) a job, who snorts Adderall, who is smart enough to count cards at an Atlantic City blackjack table but dopey enough to announce that she’s doing so, who gamely delivers lines like, “They should’ve called it ‘bi-school,’ cause I was bi as fuck back then. Bisexual. Vagina and penis.” But the funniest thing she does in the pilot (tone: sincere) is simply roll down her car window, an echo of the funniest thing she does in Crazy Rich Asians.

This broad and erratic show is a hell of a time to absorb the lesson that the mantra Less Is More applies to this person especially, though The Farewell already proved that in dramatically different, and in fact nearly incompatible, circumstances. What I’m saying is that it’s awfully jarring the first time Nora calls her tiresomely profane Comedy Central grandmother Nai Nai.

The triumph of Awkwafina in The Farewell—she stars as the similarly adrift Billi, who travels from NYC back to China so her family can say goodbye to her grandmother, who is (humanely, arguably) unaware she’s dying of cancer—is not the tired old wacky comedian gets dramatic by totally suppressing her wackiness cliché, but something savvier and quieter and more sweetly devastating. It’s a movie about suppressing your emotions, about not saying or for that matter not acting what you’re feeling, where the whole dramatic tension is whether Billi’s ever going to crack and behave like she’s a character in an Oscar-worthy drama. (The Farewell really should’ve been nominated for, like, 10 Oscars, dammit.)

Moreover, like Crazy Rich Asians (an outlandish success) or Ocean’s Eight (a moneymaker but a sizable disappointment) or even late 2019’s Jumanji: The Next Level (experts agree she steals it), it’s an ensemble piece wherein Awkwafina’s star power multiplies tenfold for every other person in the frame. With Billi, the volatile troublemaker, the cartoonish faildaughter, even the problematic viral-video scamp Awkwafina represents is always present, but suppressed in a natural and heartbreaking way. The camera looks on, unblinking and unmoving, as Billi and her beloved Nai Nai (Zhao Shuzhen) run through Nai Nai’s morning exercises, circling each other, giggling and wandering off camera. There’s simultaneously nothing and everything to this: They’re hardly acting at all, and yet conveying a dozen teary monologues’ worth of raw feeling.

Part of that raw feeling is the small miracle of a film mostly set in China getting any non-foreign-category Golden Globes attention at all; for all her culture-clashing singularity, every new milestone Awkwafina hits is partially a triumph of representation, too. (Her monologue when she hosted SNL in 2018 was quite wobbly until she very endearingly shouted out Lucy Liu, the only other Asian woman to ever host the show.) Which in turn makes the blaccent argument especially fraught, and the Comedy Central show, which very explicitly harkens back to Awkwafina’s roots—in a bizarre promotional coup, for one week only, she’s the voice of the no. 7 train—is of course mired in Queens, in her pre-rap-star salad days, in her genre- and identity-fluid origin story that is technically still ongoing. In the early episodes it’s treading lightly, rap-braggadocio-wise, and anyway, her last musical project, the 2018 EP In Fina We Trust, politely suggests that hip-hop is not her future, with all due respect to the line “Pussy so wet that it swim with fishes.”

No, her future appears to lie in literally everything and everywhere else. It is unfair maybe to compare Nora Is Awkwafina From Queens to the low-key mastery of The Farewell or the much higher-key mastery of the several recent Comedy Central shows much better than it. The show is fine, albeit very dumb, and it’s an entirely different dramatic sport that only underscores her ability—a little uncomfortable but totally undeniable—to play a whole lot of different sports. “My trajectory doesn’t make any sense,” Awkwafina told The New York Times last week, in a diplomatic reply to the suggestion that this sitcom was inconvenient to her bizarrely stratospheric career. She’s above it. You’re above it, too. But there is pleasure, albeit also a sense of vague unease, in watching her semigracefully wallow it in anyway.