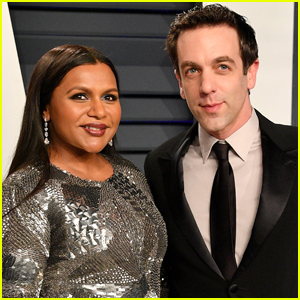 On Wednesday (October 21), the 41-year-old The Mindy Project actress took to her account to take part in the viral “How It Started” meme challenge.

Mindy took part in the challenge by sharing pictures of “How it started” during the early days on set of The Office versus “How it's going” with a pic of herself looking stunning in a yellow Dolce & Gabbana dress from the 2020 Oscars.

“So yeah, it’s going pretty well. How about you?” Mindy captioned the post.

B.J., also 41, then took to the comments to react in the sweetest way ever, writing, “I like both.”

If you didn't know, Mindy and B.J. dated on and off for a few years while working on The Office before splitting up for good in 2007. Despite breaking up, the two have remained super close over the years, and B.J. spends a lot of time art her house hanging out with her daughter Katherine, 2.