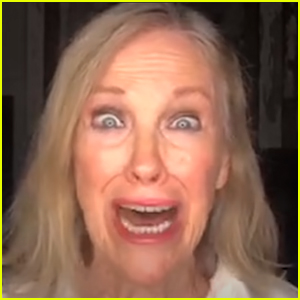 Catherine O'Hara just conquered TikTok without even having an account on the social media platform.

Fans are just now finding out that the 66-year-old Schitt's Creek star is also the mom from Home Alone.

During a special Zoom event on Josh Gad‘s Reunited Apart series earlier this summer, Catherine flawlessly recreated the iconic scene from Home Alone 2 of her yelling “Kevin!” when she realizes she's left her youngest son at home while flying to Florida for the holidays.

The clip was recently shared on TikTok by a fan, and it's now gone viral with a massive 437,000 likes.

In the recreation of the scene, Catherine even faints after yelling Kevin's name.

There's been a lot of Home Alone revelations this year, as Kieran Culkin, who is star Macaulay Culkin‘s brother, admitted he didn't realize his brother was the star of the film.

If you missed it, Macaulay also recreated his iconic after shave scene from the first movie in a surprising way. See it here!