From the GREAT STATE OF MAINE…

Next month marks the second anniversary of the mass shooting at Marjory Stoneman Douglas High School in Parkland, Florida. It's no exaggeration to say that in the aftermath the NRA, so used to the fallout from these tragedies blowing over with time, never knew what hit 'em.

The MSD shooting survivors—many of whom, like David Hogg, Emma Gonzales, and Cameron Kasky, are now household names—got so fed up with the indifference and deliberate gridlock caused by the gun makers' mouthpiece and their Republican blockers that they, to coin a phrase, scienced the shit out of organizing to keep guns out of the wrong hands. Over the weekend we got a nice update from March for Our Lives recapping some of their 2019 accomplishments:

✎  After packing the House, H.R. 8—the Bipartisan Background Checks Act—passed. This was the first gun violence bill to pass through the House in a generation. And, just a few weeks ago, Congress reached a deal to allocate $25 million towards gun violence research.

✎ Over 300 young people from around the country came together for Our Power—our first-ever summit to train student organizers with the tools and skills they need to take on the NRA and fight for gun safety laws.

✎ We rolled out our Peace Plan—a bold, comprehensive layout for the policies and steps a future president should take to end the gun violence epidemic.. 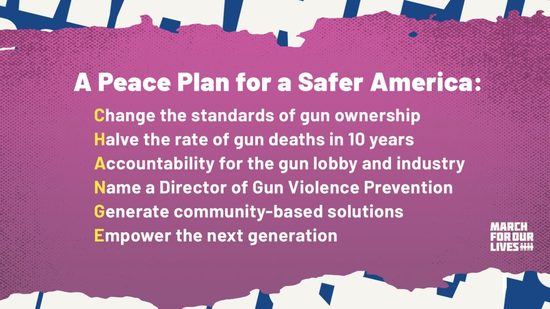 ✎ In collaboration with Giffords, we brought nine of the leading Democratic presidential candidates together in one of the first presidential forums on gun violence and talked to them about policy and violence prevention.

✎ Between all of this, dozens of  legislative victories at the state level,  plus all the NRA fails, it was a pretty good year. All of it was thanks to the support of activists, families, educators, and young people from around the country.

Impressive. But needless to say, GOP corruption and inaction are still delaying bills and making America one of the most bizarrely trigger-happy places on Earth. March for Our Lives has an aggressive agenda for this year, including “registering as many young people to vote as possible and turning them out to vote…just like we did in historic numbers in 2018.” No small task.

One thing we know for sure. There will be more mass shootings this year—probably hundreds—and some will take place at schools. If you feel like donating a few bucks into the March for Our Lives Action Fund to help keep 'em working to knock those numbers down, their donation link is here.

Cheers and Jeers starts below the fold…

Note: This year’s Super Secret Hidden Million Dollar Mystery Phrase—which could appear anywhere on Daily Kos, including scrunched up real tiny in the margins of a diary, the front page, or the Help Desk—is “Disarray of the Union Address.”  Can you find it? Good luck!

Days 'til the “Disarray of the Union Address”: 28

Days 'til the Florida Manatee Festival in Crystal River: 11

Value of the personal possessions that the average American lost while drinking alcohol last year, according to Harper's Index: $192

Value of the personal possessions that the average drunk North Dakotan lost: $380

Age of Bitcoin as of last Friday: 11

Factor by which Bitcoin's daily transaction volume grew in 2019: 5x

CHEERS to appropriate punishment for an unruly child. The United States has been behaving badly in Iraq ever since the first Patriot missiles rained down on Baghdad a generation ago. But the assassination of Iranian Archduke Fuckety McFuckface, which nobody knew was going to happen except Israel and Trump's plastic surgery-scarred cirrhosis cult hanging out on his patio at Mar-A-Lago, was the last straw. And let's hope they add some enforcement teeth to this:

Iraq’s parliament passed on Sunday a resolution calling on the government to end all foreign troop presence in Iraq, as backlash grew after the killing of a top Iranian military commander and an Iraqi militia leader in a US strike in Baghdad. […] 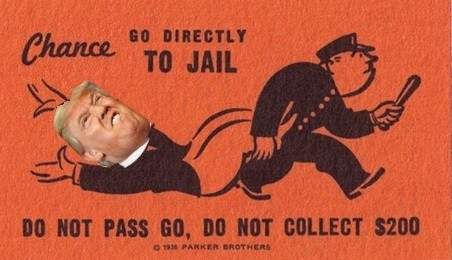 Pass the above resolution next, Iraq, and we’ll be the ones showering YOU with sweets and flowers.

“The Iraqi government must work to end the presence of any foreign troops on Iraqi soil and prohibit them from using its land, airspace or water for any reason.” … The resolution before the parliament on Sunday specifically called for ending an agreement in which Washington sent troops to Iraq more than four years ago to help in the fight against the Islamic State group.

CHEERS to competent candidates courtin' the commoners in corn country. Iowa Iowa Iowa Iowa Iowa Iowa Iowa.  Now that I have your attention, let's talk about Iowa.  We're seven days away from the Democratic debate at Drake University—Go, Fightin’ Bulldogs!—in Des Moines, and so far five contenders have cleared the gate: The B-Team (Bernie, Biden, Buttigieg), Warren (who got Julian Castro's endorsement yesterday), and Klobuchar. Here's where they currently stand, according to the latest CBS News poll: 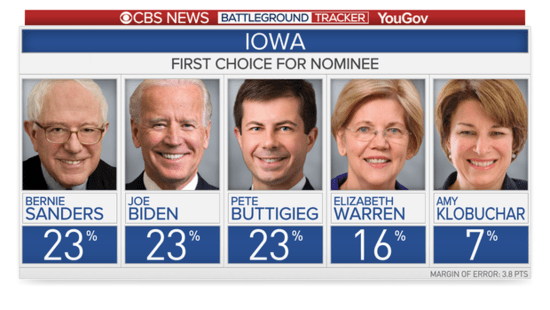 The Iowa Caucus caterwauling (“Red Rover, Red Rover, let Delaney's supporters come over!”) happens on a frigid night 27 earthly rotations from now. Until then, C&J urges you study up on the candidates, and eat lots of Iowa corn. It's got fiber for digestion and is a decent source of folate, thiamin, phosphorus, vitamin C, and magnesium. Plus, stitch together the husks and add a zipper and you got yourself a pretty snazzy-lookin' pair of trousers there, bub.

CHEERS to one wacky Whig.  Happy 220th Birthday to #13 Millard Fillmore, whose beginnings could scarcely be more humble:

He was born in upstate New York in Cayuga County the second of eight children to such an impoverished family that they could not even afford to feed him. 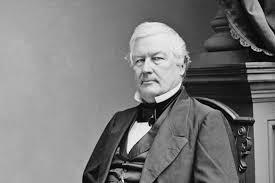 His father apprenticed (indentured servant) him to a cloth maker at age fifteen, so brutal it stopped just short of slavery. Millard Fillmore taught himself to read by stealing books. He finally managed to accumulate thirty dollars to pay the obligation to his master and was free.

During his accidental presidency (thanks to Zachary Taylor becoming the first president to choke to death on Pop Rocks and Diet Coke), he sent Commodore Perry to open trade with Japan.  He also postponed a civil war by signing the Compromise of 1850, which added California as a free state but also strengthened the fugitive slave law. To his credit, he was the rare pre-Civil War president who never owned slaves himself, but his defense of keeping it was weak, weak sauce. On top of all that, Queen Victoria once told him he was the most handsome man she'd ever laid eyes on.  Moments later, Fillmore unofficially became the first person to swim the English Channel in under a minute.

CHEERS to today's edition of “Nazis out!” Courtesy of the fine American patriots in Pittsburgh, PA…

This nazi was my highschool substitute teacher. Once in history class he asked me if I was Jewish and when I said yes he didnÃ¢Â€Â™t make eye contact with me again. https://t.co/q46J7aUiiR

This has been today's edition of “Nazis out!”

JEERS to the dick in the dock. Criminal charges for a litany of sex crimes against women were filed yesterday in Los Angeles against former movie producer Harvey Weinstein. Meanwhile, jury selection begins today in New York in two other cases, each with their own list of charges. To get you up to speed, here's a partial list of what Weinstein is facing: First-degree ick, Second-degree blech, Third-degree OMG, Fourth-degree WTF, and Fifth-degree you monster. To prevent him from making a run for it in the courtroom, deputies will cuff his penis to his chair using tweezers and a microscope.

CHEERS to the Republic's Big Moment.  On January 7, 1789, the first U.S. Presidential election was held, but there was no popular vote.  Instead, each state's appointees to the now-long-obsolete Electoral College got to vote twice.  The top two vote-getters would become president and veep. They picked the stoic hero George Washington and the cranky curmudgeon John Adams.  Their first conversation: 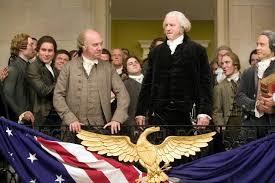 Only known photo of Washington and Adams.

“I dunno, I thought you knew.”

“Well, I thought you knew.”

“Hey…wanna get drunk and barf in Jefferson's desk?”

“Does the Constitution say we can?”

The rest, as they say, is history.

CHEERS to RNC chairman Michael Steele.  Because, really, isn’t it about time someone had the courage to stand up and proudly revive timeless racial epithets like “Honest Injun?”  We think so.  Be sure to catch him today on CNN as he bounces onto the set and announces he's feeling “as chipper as Ching Chong Chinaman.”

And just one more…

CHEERS and JEERS to the speech spankers.  Right on schedule, Lake Superior State University's annual “banished word list” popped up on the scene to give the cable news anchors a “kicker” story over which to hone their phony-chuckling skills. Sure, we're happy to see terms like “OK, boomer,” “literally,” and “totes” on the list. But C&J—thin-skinned as we are—will never shake the bitterness that infused our lives on that dark day in 2005 when they went off the linguistic deep end and tried to banish…us!

BLOG – and its variations,including blogger, blogged, blogging, blogosphere.  Many who nominated it were unsure of the meaning.  Sounds like something your mother would slap you for saying

“Sounds like a Viking’s drink that’s better than grog, or a technique to kill a frog.” Teri Vaughn, Anaheim, Calif.

“Maybe it’s something that would be stuck in my toilet.” – Adrian Whittaker, Dundalk, Ontario.

So, for the fifteenth year in a row (and until they apologize for being such meanies), C&J humbly keeps these four words on its own banished list: Lake Superior State University.

Have a tolerable Tuesday. Floor's open…What are you cheering and jeering about today?

Meat Loaf calls Bill in Portland Maine “Brainwashed” in obvious attempt to get us to read Cheers and Jeers.