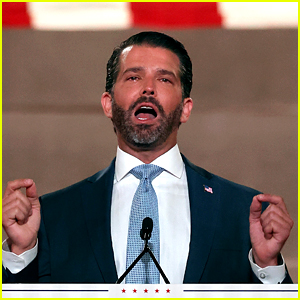 “Cocaine” is one of the top trends on Twitter, just moments after Donald Trump Jr. gave his speech at the 2020 Republican National Convention.

The 42-year-old son of the President of the United States spoke live from the Mellon Auditorium on Monday night (August 24) in Washington, D.C.

During his speech, Don Jr. attacked the “radical left” and showed his support for his father, but there are a lot of people on Twitter that had criticism for his speech.

Also speaking during the RNC was Don‘s girlfriend Kimberly Guilfoyle, who gave a very forceful speech in which she seemed to be screaming at the audience. See how people are reacting to that speech.

You can watch Don Jr.‘s speech below and read on for reactions to “cocaine” trending after the speech. No evidence has been presented to suggest that cocaine should be associated with the RNC, but it became a talking point on Twitter.

Click inside to read what people are saying about “cocaine” trending…

Read what people are saying about the “cocaine” trend below.

Saw "Cocaine" trending & I instantly knew this was who's being referenced. https://t.co/X7Cu3F5ORC

It's not a good sign that cocaine is a top trend following a political convention.

Why did "Cocaine" start trending just because Don Jr. and Kimberly Guilfoyle spoke at #PutinsGOPConvention?

Night one of the #RNC2020 and Cocaine is trending about Don Jr.😂😂 pic.twitter.com/LJQjeI1b9V

“Cocaine” is trending on twitter after the RNC, so, yeah.

Is the official sponsor of the RNC Cocaine?