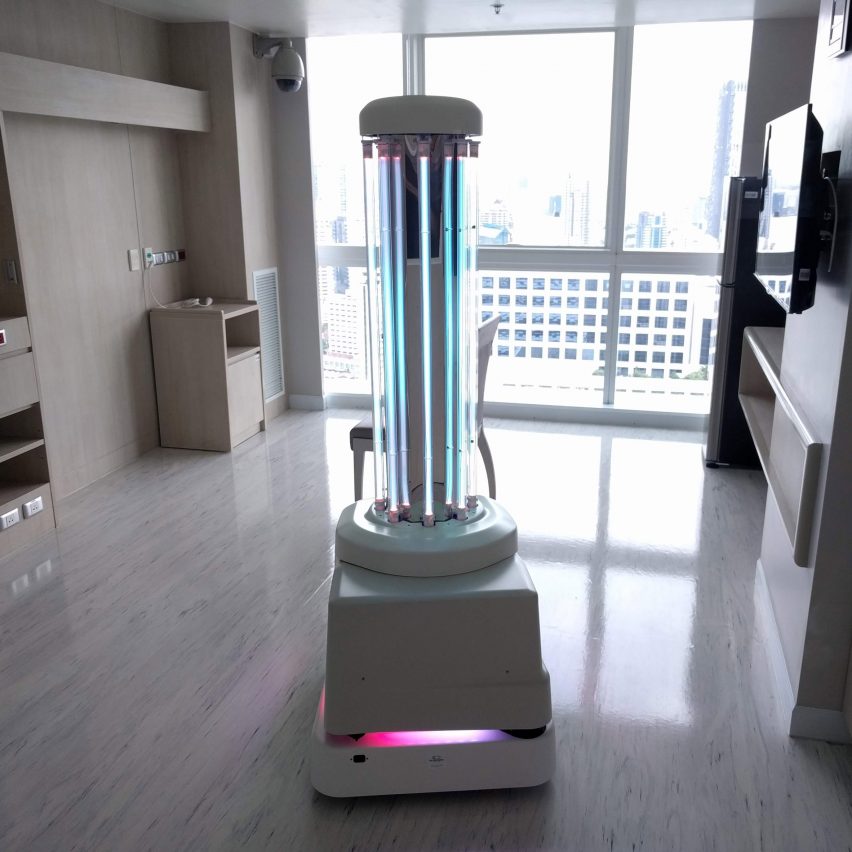 China is deploying robots and drones to remotely disinfect hospitals, deliver food and enforce quarantine restrictions as part of the effort to fight coronavirus.

Chinese state media has reported that drones and robots are being used by the government to cut the risk of person-to-person transmission of the disease.

There are 780 million people that are on some form of residential lockdown in China. Wuhan, the city where the viral outbreak began, has been sealed off from the outside world for weeks.

The global death toll from coronavirus topped 2,100 people this week, with over 74,000 infected.

Global Times reported on viral videos showing drones with loudspeakers directing individuals in rural areas to go back inside. Officials are allegedly using the technology to supervise and give orders remotely to civilians.

There have also been reports of drones using thermal imaging to detect people with fevers from the air.

Drones have joined fight against novel #coronavirus (COVID-19) in China. Equipped with thermal imaging technology, they can detect those with a fever up in the air. Check out drone patrol in central China's Hunan pic.twitter.com/BP6ZTYTdkA

These viral videos could “absolutely be real” said drone expert Andy Miah, author of Drones: The Brilliant, the Bad and the Beautiful.

“I think they're an incredibly appealing tool for the law enforcement industry,” Miah told Dezeen. “The drone gives the police force a capacity to roam and be present in a way that no other means of movement have allowed in the past.”

Unmanned vehicles, both arial and terrestrial, have allowed the Chinese government to reduce the number of people put at risk of catching the virus.

Miniature, remote-controlled tanks have been seen on on the streets of Taiyuan in northern China. Directed by staff wearing hazmat suits, the tanks made by Shanxi Tianyi Technology can reportedly disinfect 50,000 square metres in an hour.

“We began using them for disinfection and disease-prevention in Taiyuan on 4 February,” deputy secretary-general of the Shanxi Province Unmanned Vehicle Association Hou Yongei told AsiaWire.

“Twice a day, we send them into gated communities where there have been confirmed cases.”

Drones have allegedly been used to hover over the construction sites for two emergency hospitals being built in Wuhan and provide light and construction staff worked through the night. One hospital was built in just nine days.

According to Reuters, a robot called Little Peanut has been used to deliver food to occupants of a hotel in Hangzhou where over 300 quarantined passengers of an infected flight are staying.

Amid a novel #coronavirus outbreak, robots are deployed to deliver meals to travelers in isolation at a hotel in Hangzhou, China. #pneumonia pic.twitter.com/BgWZm4L1m6

“What we've seen over the last five years, is a growing deployment of drones in circumstances where we'd rather humans were not put at risk,” said Miah.

“While it makes a lot of sense, the kind of future that this presents us with is one where we use robots instead of humans in a whole range of circumstances, from military conflict to civilian policing,” he added.

“For some, this is a dystopian nightmare, but if you're one of the service staff who are placed in harm's way, or, even more so, the person responsible for putting them there, then it's much more appealing to use a robot or a drone.”

On February 19 2020 it was announced that Danish-designed self-driving UV Disinfection Robots are being shipped to China for use in hospitals.

These devices, from UVD Robots, emit concentrated UV-C light from a column of bulbs on top of a wheeled base. The light has a germicidal effect, allowing it to kill airborne viruses and bacteria on surfaces. 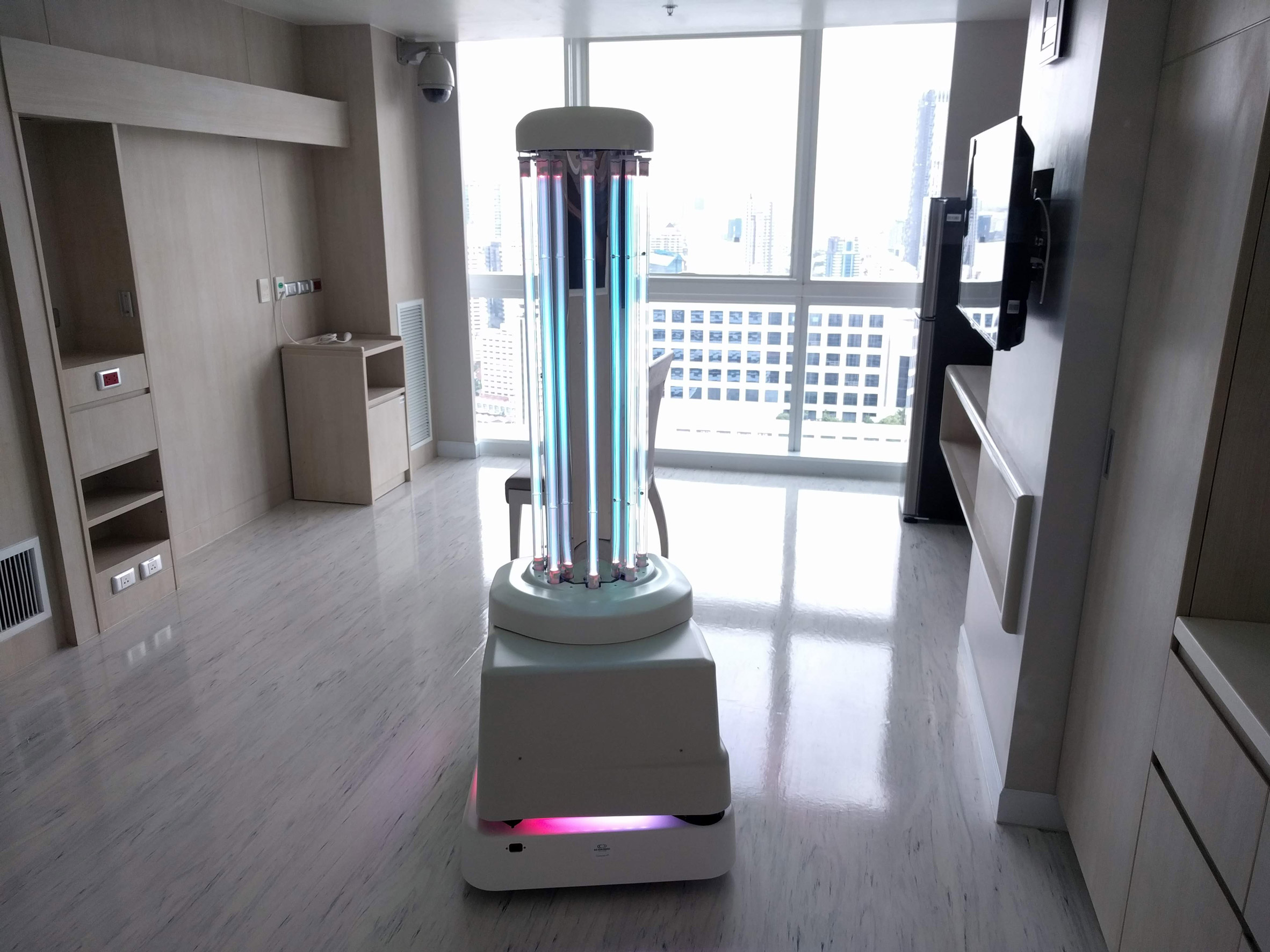 Using an app, cleaning staff can direct the robot to take enter rooms and disinfect them in just 10 minutes. Sunay Healthcare Supply now has exclusive rights to distribute the UV Disinfection Robot in China.

“More than 2,000 hospitals will now have the opportunity to ensure effective disinfection, protecting both their patients and staff,” said CEO of Sunay Healthcare Supply Su Yan.

Antwork's parent company Terra Drone said that using drones was 50 per cent faster than roads and helped cut the risk of spreading the disease.

“With more and more medical staff and ambulance being transferred to the front line, in the case of extreme personnel shortage, the use of drone transportation can also save human and material resources,” said Terra Drone.

Boat delivery routes over Baiyang Lake in northern China's Hebei province have been disrupted by the epidemic. JD.com used a drone to deliver a package of electronics and snacks to Liuzhuang village.

The company has also used autonomous vehicles to drive 600 metres to deliver parcels to a hospital in Wuhan.

China Electronics Technology Group has developed an app where users can enter their name and identity card number to check whether they have come into “close contact” with a carrier of coronavirus.

However, despite all these technologies, China is having to use human volunteers to tackle the virus.

In some cities, government restrictions mean only one member of a household is allowed to leave the home to pick up supplies every few days.

Some citizens in China have developed their own ways to try and fight the virus without expensive technology. One video on Youtube shows a man with machine blowing out disinfectant, sitting on the back of a vehicle being driven around Zhuozhou City.

Dezeen's first documentary short, Elevation, examined how drones are changing cities. Officials in New York are pushing to use drones to examine buildings to make the city safer.

The post Drones and self-driving robots used to fight coronavirus in China appeared first on Dezeen.