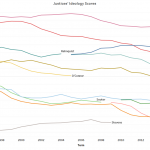 Unanimity in the Supreme Court used to be the norm. In the early years of court history there were few dissents, and so there was little opportunity to examine differences between the justices outside of how they authored their majority opinions. This practice has changed over the years, and now decisions are more frequently divided rather than unanimous.

These agreement levels are based on unanimous as well as divided votes and refer to agreement at least in part, meaning the two justices together joined at least one majority, concurring or dissenting opinion. The majority of the time justices like Thomas and Sotomayor vote together, other justices vote alongside them as well. Seldom do we see justices who often disagree vote together in isolation. Thomas and Sotomayor only once voted together without any other justices, in dissent from the 2016 decision in Voisine v. United States.

Over time the justices’ agreements are captured in certain ideology measures. Martin Quinn (MQ) Scores, for instance, are based on justices’ voting agreements, as justices with closer scores vote together more frequently, and the distance between justices’ scores increases as they vote together less frequently. Positive MQ Scores equate to a more conservative ideology and negative scores equate to a more liberal ideology. Ideology in this context, however, is merely a function of voting alignment. The justices’ MQ Scores for the 1994 through 2018 terms are shown in the graph below. 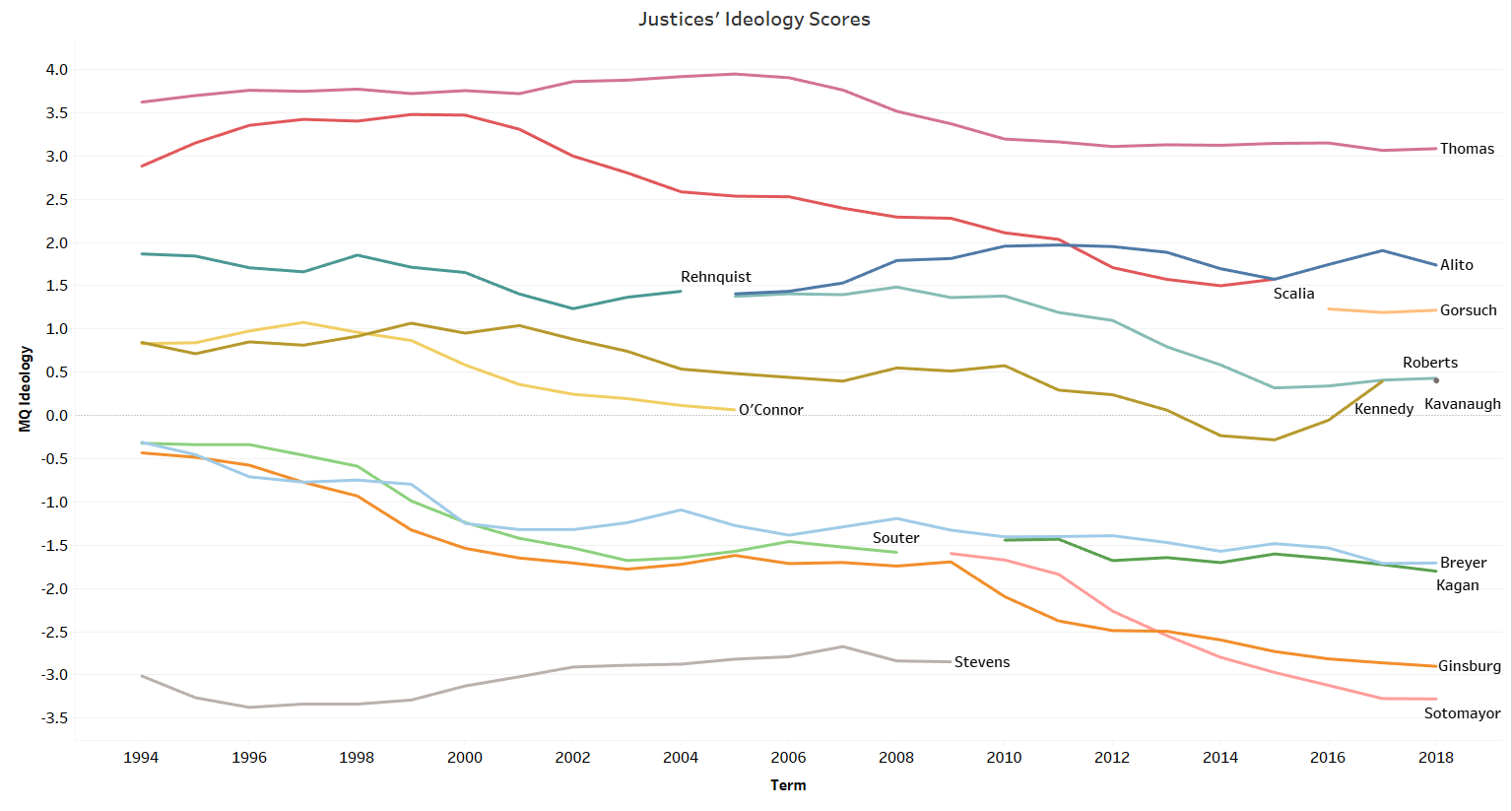 This period is important because it begins with Breyer’s first year on the court. After Breyer joined the bench, the court’s membership was stable until Chief Justice William Rehnquist passed away in 2005. The justices tend to cluster into three groups. The more liberal justices have more negative numbers and include Ginsburg, Breyer, Sotomayor and Kagan as well as Justices David Souter and John Paul Stevens. The more conservative justices have more positive numbers and include Roberts, Thomas, Alito, Gorsuch and Kavanaugh as well as Rehnquist and Justice Antonin Scalia. Justices Anthony Kennedy and Sandra Day O’Connor, although both relatively conservative, were the most moderate justices during this period and fall toward the middle of the graph.

We do not often expect to see a conservative justice vote along with one or more liberal justices, nor a more liberal justice vote along with one or more conservative justices. We have only seen this twice so far in argued cases decided this term: In Thryv v. Click-To-Call Technologies Sotomayor and Gorsuch dissented together, and in Ramos v. Louisiana Kagan dissented alongside Alito and Roberts. This is the first time that we have seen either of these dissenting coalitions, and coincidentally, both of these decisions were released on the same day (April 20, 2020).

Because these cross-ideological coalitions do not arise very frequently, it is interesting to consider when and why they occur. Commentators suggested that Kagan’s reasons for dissenting in Ramos, in which the court overruled an earlier case to hold that the Constitution requires a unanimous jury verdict in state criminal trials, were different than Roberts’ and Alito’s. According to this argument, Roberts’ and Alito’s votes in Ramos stemmed from a more conservative approach, while Kagan was motivated by a concern for precedent. She expressed a similar concern last term in her powerful dissent in Knick v. Township of Scott, in which she questioned the basis for the majority’s overturning the decision in Williamson County Regional Planning Comm’n v. Hamilton Bank of Johnson City.

Pooling all the cases with such cross-ideological votes since the 1994 term, we see a few trends of interest. First is an uptick in these votes in decisions with liberal outcomes, according to data from the United States Supreme Court Database, which codes most of the court’s decisions as conservative or liberal. The following graphs show both the fraction and the overall number of liberal decisions with cross-ideological votes on top and the percentage of liberal decisions in all cases below. The gray lines show the trends over time. 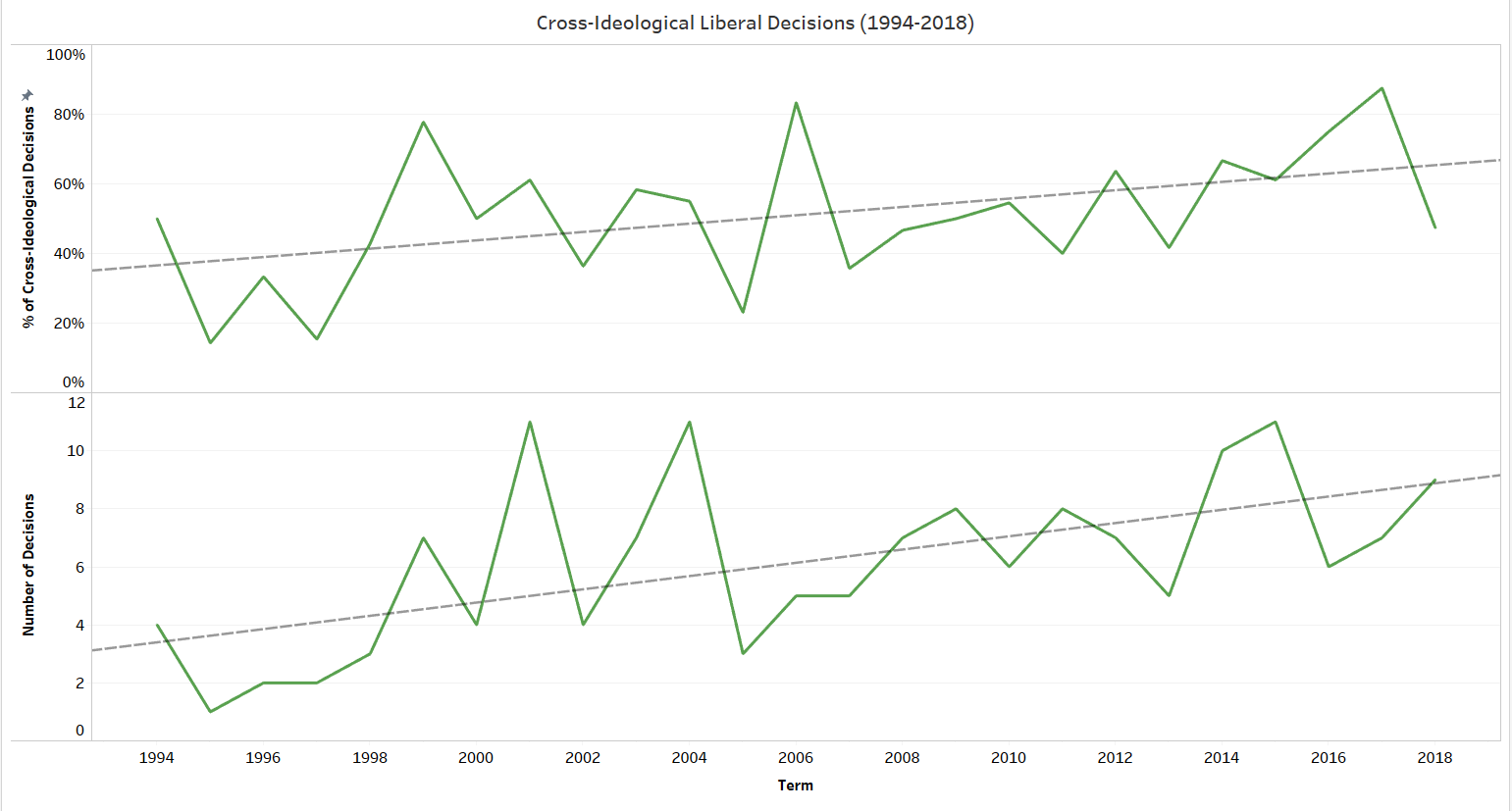 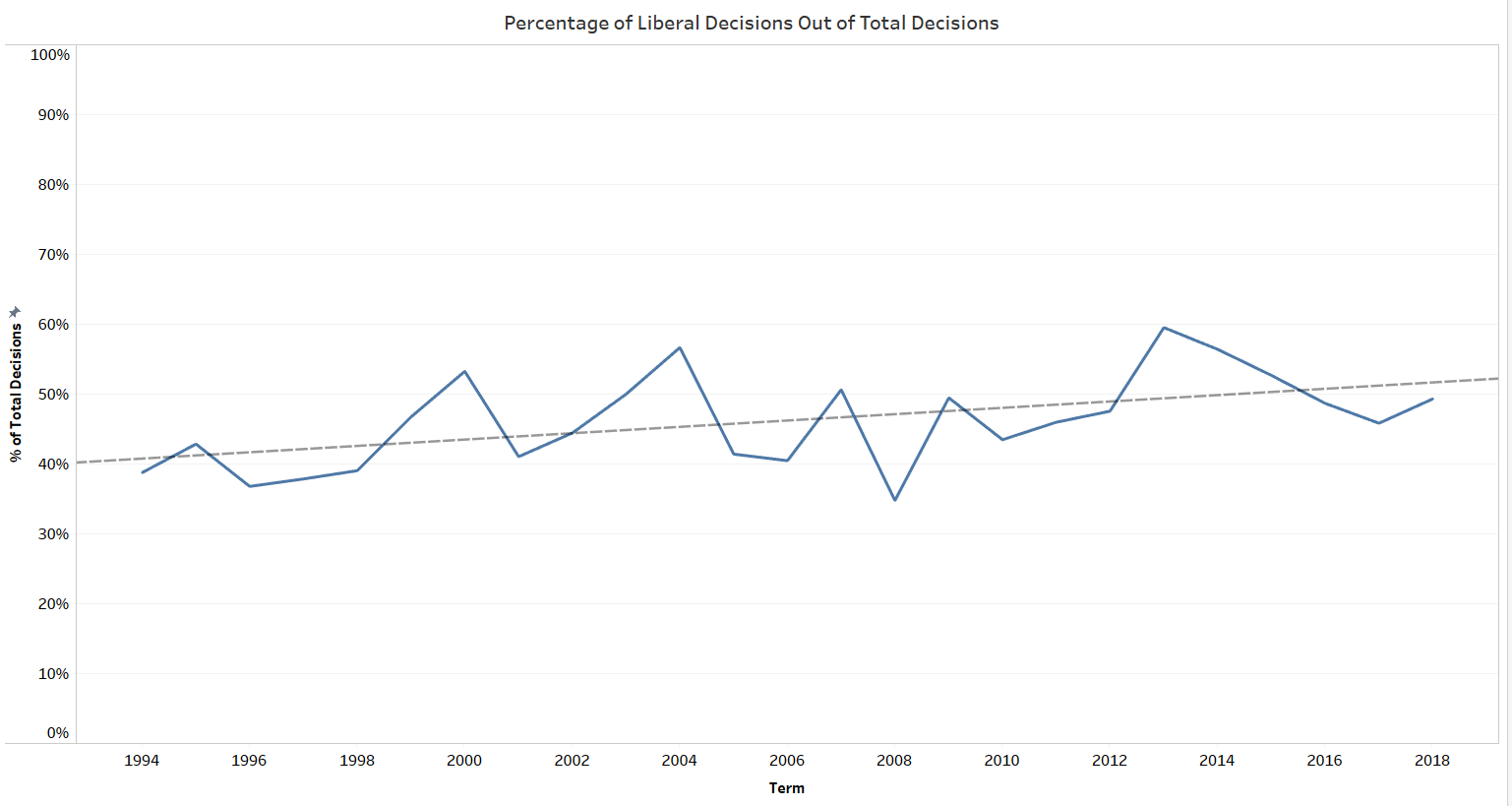 Justices may be strategically moderating their positions on specific issues to reach cross-ideological consensus, and the fact that liberal justices are outnumbered by their more conservative counterparts suggests that liberal justices might be more strategic about moderating their positions to bring in a conservative justice to create a majority or to join ideologically distant colleagues in dissent. 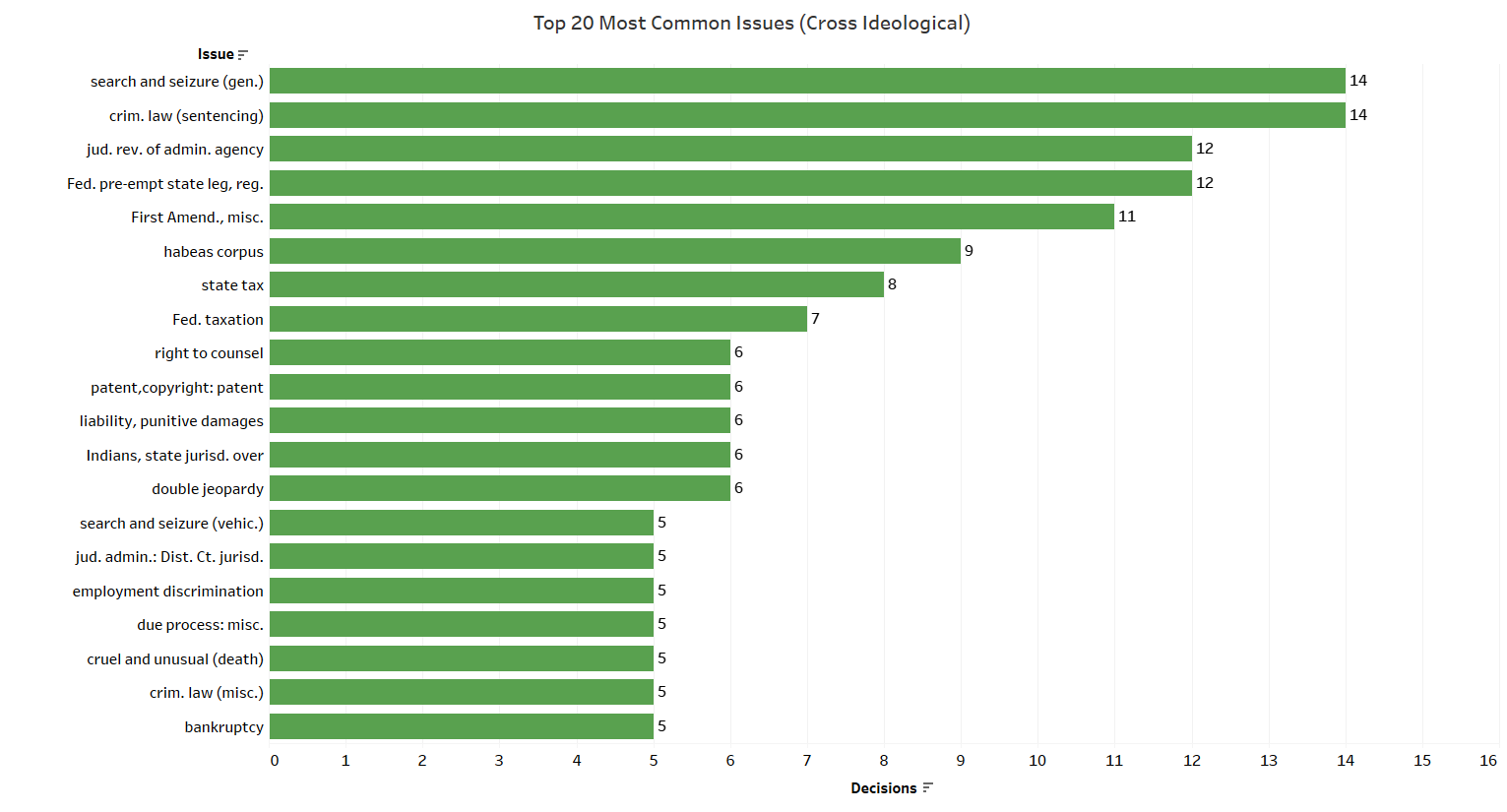 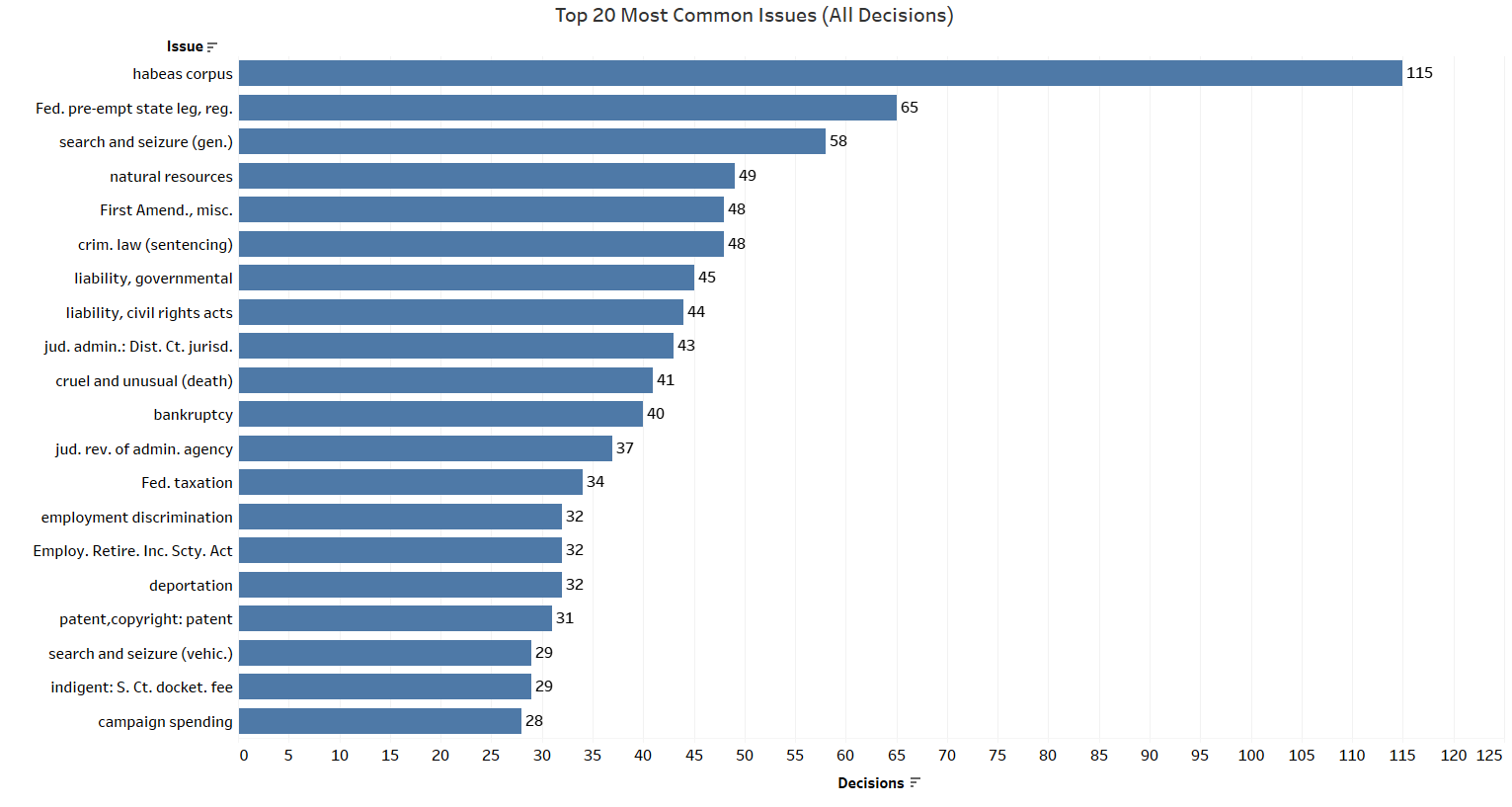 Habeas cases dominate the court’s main docket, dwarfing other issues in comparison. They are less common among cases with cross-ideological votes. Search-and-seizure and criminal sentencing cases most often produce cross-ideological votes. Both are important issues in the court’s main docket, although several issues are more dominant than criminal sentencing, including natural resources and the First Amendment.

Another important area for cross-ideological votes is judicial review of administrative agency actions. This issue is also within the top 20 issues on the court’s main docket, although it falls much lower on the list.

Case areas on the court’s most common issue list that are not on the cross-ideological list include:

One further difference we see between the court’s overall merits docket and cases with cross-ideological votes is with majority decision authors. Opinion authorship for the court’s merits docket is generally spread evenly among the justices. This is not so for decisions with cross-ideological votes, which by definition raise issues that divide the justices in interesting ways. Based on the theory of bargaining and opinion assignment, this in turn leads to assignment of the majority opinion to a justice who is able to speak for the fractured majority in each particular decision.