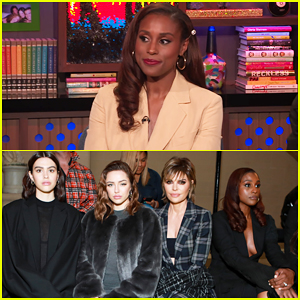 Issa Rae is finally sharing her reaction to the now viral photo of her sitting next to Lisa Rinna and her daughters – Amelia and Delilah – front row at New York Fashion Week.

While making an appearance on Watch What Happens Live along her her The Photograph co-star Lakeith Stanfield, the 35-year-old actress was asked by host Andy Cohen what exactly was going on when the photo was snapped at the Vera Wang show.

While Lisa Rinna and her two girls posed for the camera, Issa was snapped looking blankly off to the side… and a meme was born.

“The photographer wasn't trying to take a picture of me, so I just moved,” Issa told Cohen. “She was also rubbing my shoulders a lot so I wanted more shoulder room and that was it! Period.”