A couple of days ago I wrote about a situation that was going viral in South Korea, based on what happened on a KLM flight from Amsterdam to Seoul.

What happened on the controversial KLM flight?

Essentially a KLM crew had decided that a lavatory was for the exclusive use of the crew, but they only wrote a sign in Korean saying so. The crew claimed that the lavatory was blocked off in order to keep the crew safe from coronavirus.

As shown, the sign does come across as racist, in my opinion. They're clearly suggesting that Koreans shouldn't use the lavatory, while others can. The question of course comes down to whether this was an honest mistake/oversight (and they just forgot to write the message in English and/or Dutch), or whether this was intentional. 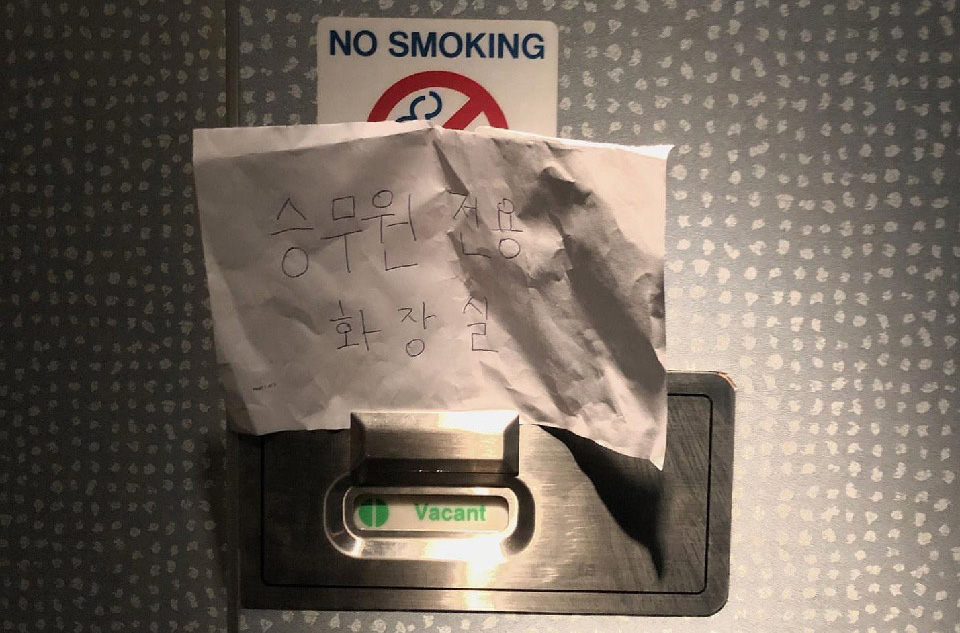 This story has hugely hurt KLM's reputation in South Korea, and as a result, KLM has now issued a formal apology.

KLM's VP of Korea, Japan, and New Caledonia held a press conference at the Four Seasons Seoul to apologize for the situation.

This started with two extended bows (it's incredible how many cameras seem to be flashing during this — clearly this was a huge press conference), and then he emphasized the following points during his speech:

“We would like to express our sincere apologies to all passengers who were offended by the operation and the announcements of the crew on the lavatories.”
“It is not KLM policy to reserve lavatory for crew.”
“The decision was taken by the crew, the announcement was written in Korean, and the English version was added later, only when it was pointed out by some customers.”
“This is a human mistake, but we don't take it lightly, and again we apologize for it.”
“We take the allegations that we have discriminated against a part of our customers very seriously. We are deeply sorry that this was viewed as discrimination, which was absolutely not the intention of the crew.”
“The issue is under investigation internally. To prevent this from happening again, our executive vice president for inflight services, will take all necessary measures.”
“The members of that particular crew will talk with inflight senior management when they will arrive in Amsterdam.”
“In addition, we have reminded yesterday to all KLM crew worldwide that it is not allowed to reserve lavatories for the sole usage of the crew, and we will remind this at every crew briefing prior to the flights departing or arriving in Seoul.”
“We would like to take the opportunity to apologize to the passengers who have been inconvenienced onboard this KLM aircraft, and to the people of the Republic of Korea, who have been offended by the incident.”

It's clear that an apology like this was needed for things to get back to normal in Korea for KLM. In the US someone gets dragged off the plane bloodied and unconscious, and the company's CEO simply claims that the passenger was “reaccommodated.”

Here the airline rented a ballroom at the Four Seasons to issue an apology just a couple of days after the incident. That being said, they're not really apologizing for the actions of the crew as such, but rather are apologizing for anyone who was offended.

As I said all along, the sign definitely came across as racist. Whether or not that was the intention of the crew is unknown (generally I try to give individuals, rather than companies, the benefit of the doubt).

What do you make of KLM's apology?