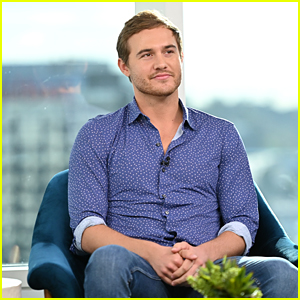 Peter Weber is getting candid about the first night of filming The Bachelor.

The 28-year-old reality star made an appearance on E!'s Daily Pop on Tuesday (January 7).

PHOTOS: Check out the latest pics of Peter Weber

During his appearance, he revealed how many girls he kissed on the first night.

“No, the first night was 12. Usually I’m a little bit slower about that and warming up to it, but Savannah – and I loved it – she was bold and was like, ‘okay, it’s on.’ She came and did the blindfold, gave me the first kiss and I was like, ‘alright, it’s on,'” she said.

He also addressed whether he still has feelings for ex Hannah Brown, who returned for Peter‘s season.

“I will say that I thought that I was in a place completely moved past that. I wouldn’t have ever decided to take this on and be the bachelor and take this amazing opportunity if I didn’t. That wasn’t fair to me or the women I was going to meet. I really thought that. And then I saw her again, and feelings came back, and they resurfaced, and that’s just real life. And I was being honest to myself and true to myself and you guys will see what happens with the rest of that conversation and the rest of the season.”

“Her coming that first night was amazing. It was a really beautiful moment, I thought. She didn’t have to do that – returning my wings – I’d given those to her as a gift. I really respected her doing that, so it was a cool moment. And I explained it to the women when I walked into the house and they were cool about it, so they were very understanding – until the next group date,” he went on to say.

Peter Weber Opens Up About Emotional Moment With Hannah B.