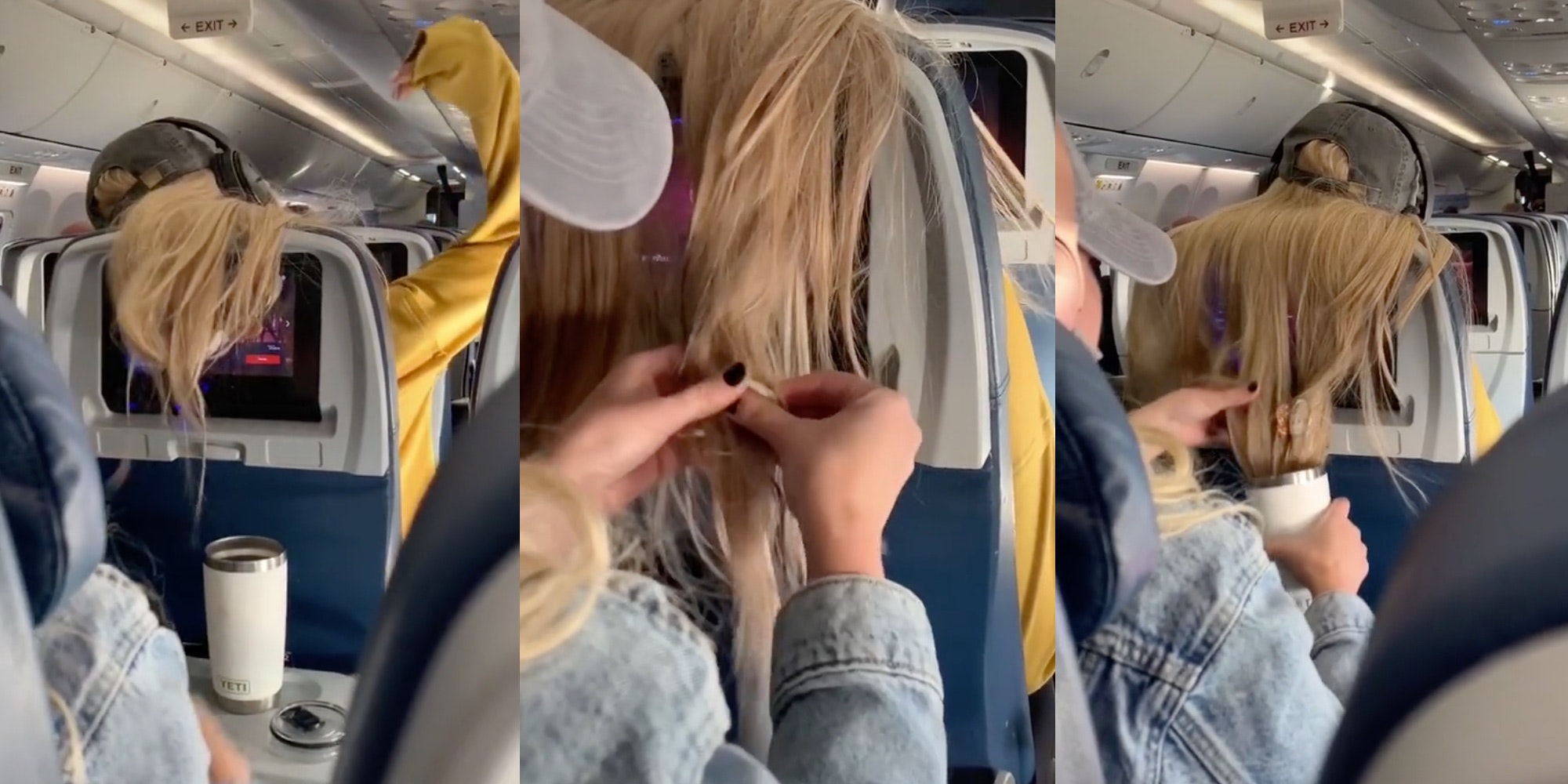 A viral TikTok video shows why it might be in your best interest to be considerate of your fellow passengers on a commercial airline.

A video posted by Janelle Elise Flom (@janelleelise) allegedly shows the revenge another plane passenger got on a woman sitting in front of her who kept tossing her hair over the seat and blocking the TV screen.

The video starts with the frustrated passenger firmly matting a wad of gum into the other woman’s long hair as it’s draped over the TV. She pauses her antics briefly as a flight attendant walks by, but then she picks up some nail clippers and begins carefully snipping off random strands.

After that, a lollipop gets added to the sticky mess, and the whole thing is dunked in a travel mug presumably filled with coffee. Jumps ahead show the woman in front repeatedly continuing to toss her hair back, even as the passenger who sacrificed her gum and her coffee for this revenge keeps throwing the hair back onto the other side of the seat.

Whose side are you on?! #ohno #toxic #drama #airplane #travel #GivingThanks

Flom’s caption simply asks, “Whose side are you on?” And people have some pretty strong opinions about the whole thing.

“At first I didn’t agree but then she kept flipping it back and ugh,” wrote @iblack235.

“Ok I legit at first thought that was awful until she showed her putting the girls hair away from her and the girl kept putting it back,” agreed @evelia_mendez. “So it changes.”

Truthfully, there weren’t many people opting to condemn the gum chewer for sabotaging the hair that ruined her flight. But there were quite a few folks who questioned the legitimacy of the whole video.

“Come on that’s a wig!!! Totally staged!!! You think after she flipped it she didn’t feel all that stuff in her hair!” @victoria_theartist pointed out.

The front passenger’s hair was definitely weighed down after having a lollipop, gum, and liquid added to it, and it would take an extreme level of absent-mindedness not to notice as much while getting into a hair-flipping war with a stranger.

Besides, Flom seems to play a lot of practical jokes on her TikTok page, many of which are as outrageous as this public display of vengeance.

Now the real question is—was that flight attendant who walked by in on the whole thing, or did she really not care about the serious hair vandalism going on in coach? Viewers may never know.

The post Plane passenger sticks gum in woman’s hair because she purposely kept flipping it over seat appeared first on The Daily Dot.