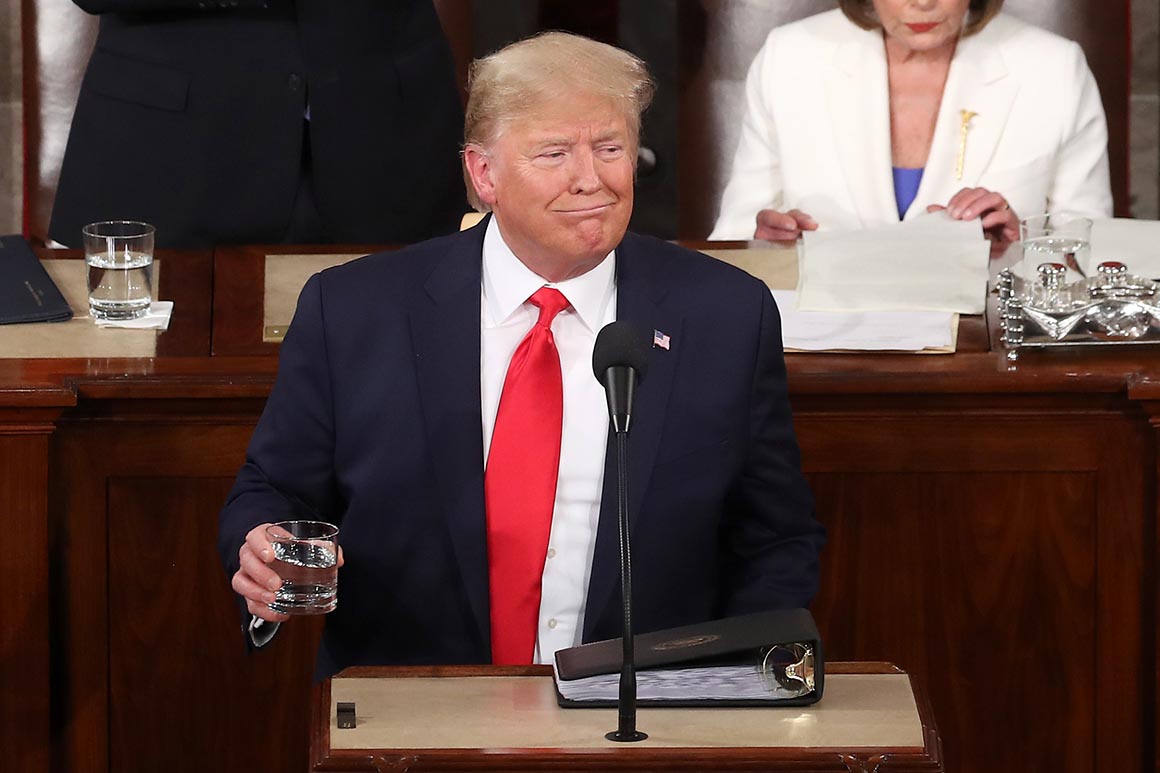 President Donald Trump likes his superlatives and you have to give him credit: He definitely earned them this time.

This was the most defiant, most boastful, most ostentatiously theatrical, most overtly campaign-oriented, most am-I-hearing-this-right? outlandish—the most flamboyantly bizarre—State of the Union Address of All Time.

It was also the most disorienting, and hard to categorize through the prism of conventional political analysis. That prism already had lost much of its utility during the Trump Era, and the president seemed to shatter it completely in a 78-minute speech to a congressional audience whose fealty and contempt toward Trump were on display in equal and vivid measure.

Trump long ago lost the capacity truly to shock, but he still has tricks up his sleeve: The speech showed he still has ability to surprise.

In particular, his speech was notable for the unapologetically zig-zag quality of the messaging. The usual rubric is that national politicians face a choice of mobilization or persuasion. One choice is to energize the partisan base with sharp-edged rhetoric and cultural and ideological scab-picking. The other choice is to blur lines with round-edged appeals to voters who aren’t on board but might yet be coaxed there.

Trump refused the choice. In keeping with the more-is-more spirit of the speech, he did both.

Steak tartare ala right-wing was on the menu. There were pledges to defend gun rights, fight abortion rights with a national ban on late-term abortions, repeated denunciations of “illegal aliens,” vows to “never let socialism destroy American health care.” There were eight references to God, and an injunction to “remember that America has always been a Christian nation.”

Most notably, there was an invitation to broadcaster Rush Limbaugh, recently stricken with lung cancer, to stand in the gallery and be draped with the presidential Medal of Freedom by First Lady Melania Trump. The president extolled Limbaugh’s “decades of devotion to our country,” as though he were a latter-day Walter Cronkite and national unifier, rather than one of the original creators of the insult-laden, indignation-oriented, attack-focused brand of conservatism that gave rise to Trump.

But the speech was also replete with rhetorical outreaches designed to expand the coalition of Trump voters in this re-election year. He talked about what he has done to reduce poverty and unemployment for African-Americans and women. He sounded like any Democrat in saying, “We will always protect your Social Security and we will always protect your Medicare. Always.” He talked of increased funding for Alzheimer’s care. The denunciation of abortion was preceded by an appeal for $50 billion for neonatal research.

Impeachment was not mentioned. But it infused every aspect of the evening. House Speaker Nancy Pelosi declined to welcome Trump to the House with the traditional words saying she has “the high privilege and distinct honor” to present the president. She extended her hand to him but he didn’t take it.

Trump puts focus on African Americans in State of the Union

And, in the evening’s most viral moment, she ripped up her copy of Trump’s speech on national television as soon as he finished speaking. She said that was “the courteous thing to do considering the alternative,” without specifying what that alternative would be. She said her gesture was appropriate given that the speech was a “manifesto of mistruths.”

The evening, including some of the 2020 campaign events surrounding it, highlighted the Democratic dilemma in responding to Trump, whose impeachment has coincided with the highest approval ratings of his presidency (49 percent in the latest Gallup survey, just two points away from the majority approval that has eluded him his entire time in office.)

Last weekend, two days before finishing atop the Iowa caucuses, Pete Buttigieg was asked by a Council Bluffs voter how he proposes to take on Trump. He answered, “I’m going to respond without becoming what we’re fighting.”

The same weekend, a spokeswoman for former New York mayor and current presidential candidate Mike Bloomberg, in an obviously orchestrated statement, said Trump “lies about everything: his fake hair, his obesity, and his spray-on tan.”

Democrats have already reconciled themselves to the fact that Trump won’t be removed from office by the extraordinary means of impeachment—his long-expected acquittal in the Senate was anticipated for Wednesday, just a day after his appearance—but the speech highlighted that he won’t necessarily be easy to remove through the traditional means of elections, either.

Imagining themselves at a party convention rather than on the floor of the House, at a ritual in which partisanship is standard but usually presented slyly by applause or its withholding, Republicans greeted Trump’s arrival with a chant of “Four more years!”

Perhaps the greatest obstacle to that is Trump’s self-absorption: Even a sympathetic voter could not conclude from Trump’s Twitter feed that he cares more about that voter’s travails than he does with his own vanities and vendettas.

At big moments, when speaking with a carefully prepared text, Trump has shown as he did again last night that he can marshal coherent arguments about what he has done for average Americans. His recitation of economic figures included a denunciation of “the failed economic policies of the previous administration” (during which the current recovery began) and a claim that as a nation, “We are advancing with unbridled optimism and lifting our citizens of every race, color, religion and creed very high.”

The speech reflected electoral college strategy in way that was barely veiled. Trump ventured into hemispheric politics with a boast about slowing or reversing Barack Obama’s policies on normalizing relations with the dictatorship in Cuba, and also with his boast about leading an international coalition against “the socialist dictator of Venezuela, Nicolas Maduro.” The leader the United States recognizes as legitimate in Venezuela, Juan Guaido, was introduced in the gallery (one of the occasions during which Pelosi and Democrats rose to applaud.)

The Cuban and Venezuelan communities are important in the pivotal election state of Florida. When Trump claimed how his administration’s efforts have reduced opioid deaths, the states he cited were Pennsylvania, Michigan, and Wisconsin—regarded by strategists in both parties as the states on which the election is most likely to hinge.

Jared Kushner, the president’s son-in-law, was in the gallery with wife Ivanka Trump. He has been one of the main voices in the Trump re-election circle pushing outreach to African-Americans. He believes that men in particular might be open to Trump’s appeals, and even a minor dilution of the Democratic lock on this constituency could have huge implications in closely contested states. “To expand equal opportunity,” Trump trumpeted, “I am also proud that we achieved record and permanent funding for our nation’s historically black colleges and universities.”

At times, the evening came off as a daytime TV set. Trump saluted the sacrifices of service members overseas, and the family members striving in their absence back home, by recognizing Amy Williams, whose spouse, Army Sgt. First Class Townsend Williams, has been in Afghanistan. Then Trump said he had “a very special surprise” for Amy Williams: Her husband’s deployment was over and he arrived in the gallery to hug her.

Over the top? A garish spectacle? The point is hard to argue. Some Democratic strategists claim that Trump’s relentless controversies and self-promotion have exhausted the country, creating an opening for change.

But if turns out that Trump’s old instincts are sound—that his brand of disruption can still attract enough loyalists to compensate for the people it repels—Tuesday’s speech was a reminder that 2020, like 2016, will be a whiplashing and narrowly decided campaign.