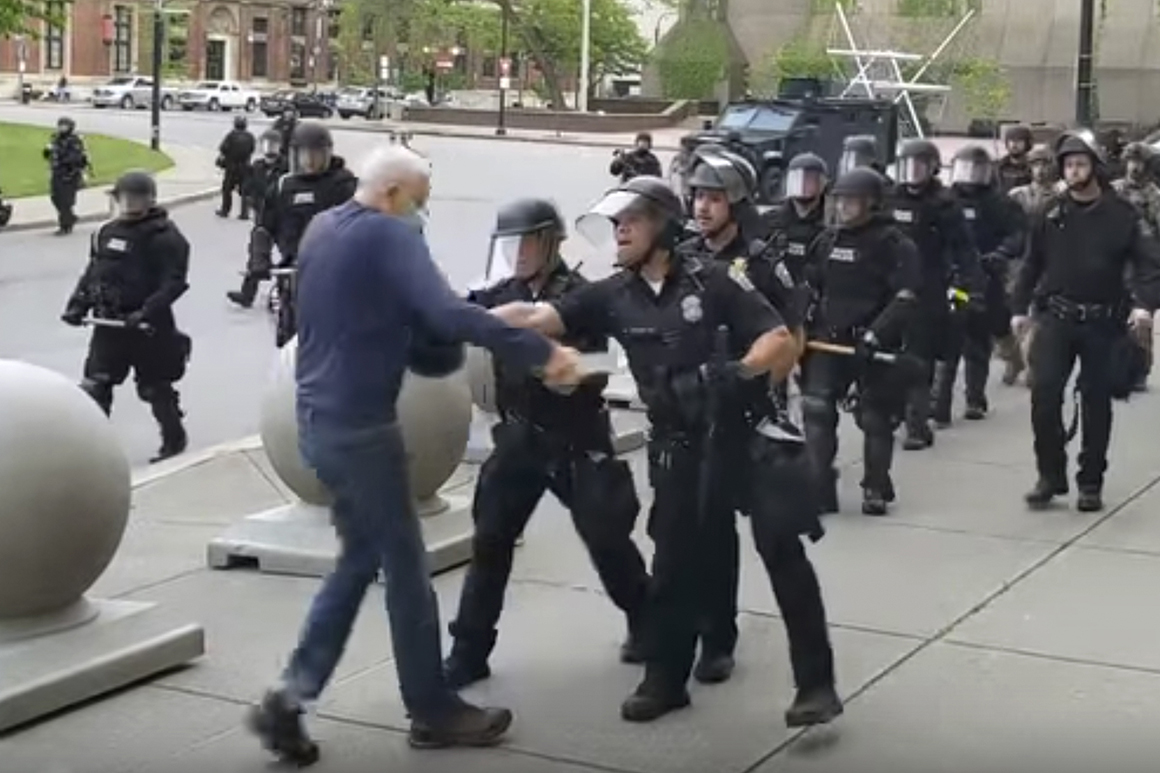 President Donald Trump on Tuesday suggested without evidence that the 75-year-old man whose head was cracked open by Buffalo law enforcement last week was an “ANTIFA provocateur,” alleging the protester was seeking to “set up” the police officers who assaulted him.

“Buffalo protester shoved by Police could be an ANTIFA provocateur. 75 year old Martin Gugino was pushed away after appearing to scan police communications in order to black out the equipment. @OANN,” Trump wrote on Twitter, citing the conservative cable channel One America News Network.

Trump added: “I watched, he fell harder than was pushed. Was aiming scanner. Could be a set up?”

The president’s conspiratorial social media post comes after a video of the encounter last Thursday between Martin Gugino and Buffalo, New York, police — shot by local NPR affiliate WBFO — went viral online amid nationwide protests in the wake of the killing of George Floyd, a 46-year-old black man, by Minneapolis police.

The footage shows Gugino approach two officers outfitted in tactical gear who were part of a larger group of police enforcing the city’s 8 p.m. curfew in Buffalo’s Niagara Square, in front of city hall. After a brief interaction, the officers forcefully push Gugino, and he falls backward onto the pavement. Officers can then be seen walking past Gugino’s body as he bleeds from his head.

Buffalo police initially said in a statement Thursday night that a person “was injured when he tripped & fell” during a “skirmish involving protestors,” but police later apologized and said they were “working with incomplete details during what was a very fast-moving and fluid situation.”

Buffalo Mayor Byron Brown announced last Friday that the police commissioner had suspended the two Buffalo police officers involved in the incident without pay, prompting dozens of other officers to step down from the department’s crowd control unit in protest.

Trump’s tweet Tuesday echoed a recent OANN segment about a report from a website called the Conservative Treehouse, which alleges Gugino “was attempting to capture the radio communications signature of Buffalo police officers.” The report states that the “capture of communications signals … is a method of police tracking used by Antifa to monitor the location of police.”

Neither OANN nor the Conservative Treehouse offered any evidence to support their claims about Gugino, who is a longtime peace activist from Amherst, according to The Buffalo News. An attorney for Gugino did not immediately respond to a request for comment on Trump’s tweet and Gugino’s current condition.

The president and Attorney General William Barr have charged that extremist organizations are largely responsible for acts of looting and violence that have broken out at some protests across the country. Republicans have specifically blamed what they refer to as antifa, a collection of far-left militant groups that often resist neo-Nazis, white supremacists and far right-wing groups at demonstrations and other events.

Trump declared last month that the U.S. government would be “designating ANTIFA as a Terrorist Organization” — even though he does not appear to have the legal authority to do so, and it is not clear that the loosely defined group of radical activists is an organization at all.

At a news briefing last Thursday, Barr claimed Justice Department officials “have evidence that antifa and other similar extremist groups, as well as actors of a variety of different political persuasions, have been involved in instigating and participating in the violent activity” at protests.

The Associated Press contributed to this report.