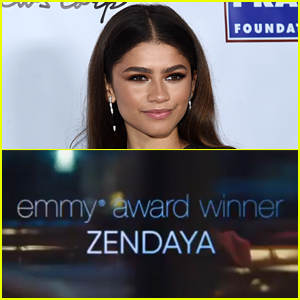 Zendaya‘s name is trending right now on Twitter and there's a fun reason why.

The new trailer for Euphoria's special Rue episode just dropped and fans could not wait to check it out. But there's a moment in the trailer that also has fans talking, and it's when the opening credits say, “Emmy Award Winner Zendaya.”

Zendaya won an Emmy a few months ago for her work on the HBO show.

Be sure to tune into Euphoria‘s special Rue-centered episode this Sunday on HBO. Check out the trailer embedded below, and some of the fan reaction tweets as well!

Click inside to see some fan reactions to Zendaya's big moment…

they made SURE to put “emmy award winner zendaya” in that euphoria trailer! pic.twitter.com/VjitaDLWNV

me when i see emmy nominated zendaya on the screen pic.twitter.com/m54F9k881M